What qualifies me for such an auspicious undertaking? What are my chops?

I have a beard and live in Hammersmith.

“More!” I do not hear you cry. There’s little else. I’m not a chef though I like to cook. I’m terribly articulate apart from when it comes to describing food. I’m a little fussy (do not like red cabbage or beetroot and distrust those who do – sorry mother, but you’re in the same category as communists and tandem cyclists in my book). And I do not eat testicles.

This is me eating horse in my favourite restaurant in Brussels, Le Pré Salé (http://en.resto.be/restaurant/brussels/7133-pre-sale/). 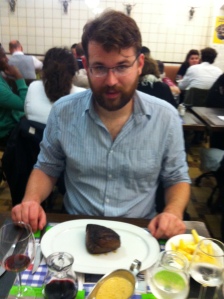 Horse is actually one of my best loved dishes, especially in Japan, where Sakura Nikku is a seasonal delicacy (seasonal I do not know why) and is served raw like sashimi with garlic and ginger to be added to the soy sauce rather than wasabi (which I also dislike). Some people are squeamish about eating horse but I try to avoid them.

Join the near dozen of people following me on twitter: 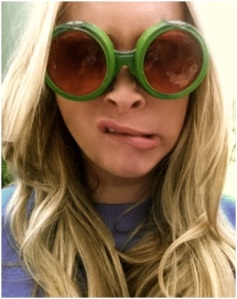 Knockers, so-called thanks to her extensive collection of brass door accessories, is aged somewhere between 12 and 37 and lives in London. She was educated and now lives in London with her partner and two cats. Having earned her keep in corporate media writing stuff, organising things and driving priggish old farts to distraction, she has spent the last two years writing stuff that’s nearly been on telly. She is currently working on her first novel, which (note to publishers/potential customers) will imbue readers with magical powers, eternal youth and untold riches. She also claims to be pregnant, although it’s widely believed that her considerable girth is almost entirely due to roast potatoes.

If more people followed her on Twitter, she’d make the effort to be more interesting. Find out if that’s true by following her at: