[I was there and I don’t remember any of this.]

“That’s not where that goes, Charlie.”

All things that Del Monte has heard many times and each of them entirely untrue.

On a recent sojourn to Palma, Mallorca/Majorca (make your minds up, Spaniards) with a group of top-notch travel companions plus Charlie, tapas was flowing like the island’s fabled waters. For the hideously uninformed, tapas literally translates as ‘little plates of lush food, oft featuring pork’. In fact, there’s no better place to get a good porking. If I were a pig (keep your comments to yourself) I’d Tamworth Two the hell out of there. Never before have I had so many tiny sausages in my mouth. I felt like one of del Monte’s ex-girlfriends [The joke’s on you Knockers- there’ve been hardly any actually].

On one particular morning-after-the-night-before (which was actually the morning-after-the-morning-before because we’re so incredibly young and hip that we got to bed about 7am) we went in search of fodder and alighted on Forn de Sant Joan. We were very lucky to get a table, given that we looked – and smelt – like a small band of vagrants, something that did not go unnoticed by the other well-dressed and fragrant diners.

Full disclosure: I was in a bad way. Like, really bad. Under normal circumstances I would have found this low-lit, subterranean eatery terribly charming, but thanks to Uncle Vino and his slutty mistress Sangria, I felt like I was in a boat and it was rocking. Fortunately, my iron-livered friends were more-able to focus on the extensive menu and ordered an array of tiny lusheouness. I’m pretty sure there was no kangaroo fish schrimp, but there was pork a-plenty, patatas bravas, battered prawns, sea bass, squid and the cornerstone of any table o’tapas: croquettes. Then, just as some dude started blow-torching a slab of meat beside me, everything went a bit hazy.

I nibbled the corner off a couple of things, sniffed a couple of others, but that was all I could manage. Never before has anything looked so enticing yet been so impossible to swallow, even food. Then someone described the croquettes as tasting like ‘creamy sausage’ and thoughts of bukkake-style cookery invaded my head. I was done for. There was no time for menu photos or washing it all down with a tall, cool anything.  If I didn’t get out of there immediately, my dining companions would be hosed down with a long, warm gush of Uncle Vino and his slutty mistress Sangria. So I legged it.

That’s one way to get out of paying the bill.

€ No idea for five people, inc. plenty of wine. 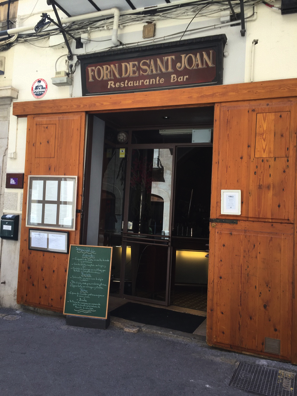