That’s the name of the place. Sri Lankan Food. Props to the naming committee. No really. You really pushed the boat out there. You knocked it out of the park. Drop the mic, walk away. In case you didn’t realise I’m being sarcastic. There must be a million awesome names for a Sri Lankan food dispensary: Tamil Tucker, Lankan Lunch, Muralitharan Munchies. And I really haven’t given it much thought. They’re just the alliterative options. I’m sure there could be ones that are a lot clevererer but I don’t really know much about Sri Lanka apart from that I often mix it up with Madagascar in that they both look similar in an atlas hanging off bigger bits of continent.

We stopped for a quick bite in the enticingly named Boiler House Food Hall (http://www.boilerhouse-foodhall.co.uk/) in the Old Truman Brewery on Brick Lane. When I think Brick Lane I think Sri Lankan food. I know most people associate Brick Lane with Bangladeshi cuisine, but I associate it with penises. Probably because of the word Lane. So having successfully dodged all the Bangladeshi restaurants even though I’ve yet to do Bangladesh yet, myself, Mrs Del Monte and Vengeance found the food market and selected Sri Lankan from the options on offer. As Vengeance is still technically a “baby”, we couldn’t order the super hottest curry which of course I would have ordered because I’m basically the epitome of masculinite, but opted for lamb and chickpea/spinach curry over rice. All very nice and achingly mild and went down a treat, but I couldn’t detect any perceivable difference between this and other curries I’ve enjoyed in the past. I’m told that Sri Lankan cuisine is awesome and there are multiple outlets in London; my chum Span highly recommends one near Peckham, but I’ve not made it there yet. So, good, but not great. I’d like to explore this further. Also, because I assume licensing is bitch in this environment, a tall, cool Lion Lager was not available to me. So I kicked a puppy.

£5 for one portion. I shan’t be going back here, but I shall be eating Sri Lankan again. 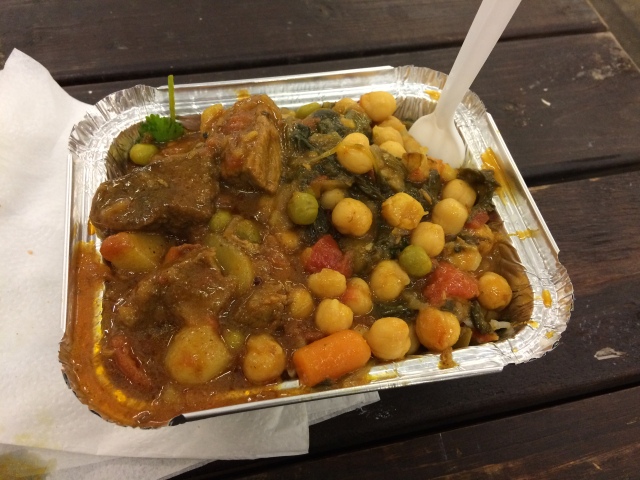 Curried lamb on the left, chickpeas on the right, rice underneath. Basically the English Defence League’s worst nightmare.

I don’t know the catalogue model posing in the foreground.