My top 5 films, in strict reverse order, were:

My point is Eclipse sucked and everyone who likes it is a loser. My new top five films, in strict reverse order, are:

OK, there are only four on that list, but the Maze Runner hasn’t come out yet so I can’t honestly put that on the list yet. September 14th cannot come fast enough. I used to be all like, vampires are way cool, but werewolves are cool too and the music was a bit edgy. But now I’m like, vampires are so 2010 and it’s kind of for kids and dystopian futures where young women can break free of the bonds that others are totally imposing on them is so much more real. Though Peeta is not cool enough for Katniss and Gale is totally more her type though Gale is a bit of a wierd name for a dude.

In preparation for watching the Hunger Games / Divergent / The Host / Maze Runner / How I Live Now, I absolutely insist on fine dining. So we popped into The Ledbury (http://www.theledbury.com/) (having reserved 2 months earlier) for a slap-up grill courtesy of i Headissimi. It’s no secret I’m quite the connoisseur of posh nosh and let me tell you, these guys can throw a plate together. Any attempt to describe the dishes would be futile. The photos should do the job. What distinguishes this type of restaurant is the peerless service, the unadvertised amuse-bouches, canapés and plus-fours and those wee swanky towels instead of bog roll. They don’t flush worth a damn and you have to keep on waddling out to the sinks to get them, but they’re so soft on your skin.

Special mention to the pigeon, served with its entrails on a skewer, like some kind of lilliputian kebab, succulent and bloody. Just the ticket. And the passion fruit soufflé which I could have continued eating until my spoon was a nub. It’s vulgar to talk about money you rubes, but let’s just say that without the benefit of someone else’s generosity I may well have tried to do a runner rather than pay.

THE ODDS ARE ALWAYS IN MY FAVOUR!

Amuse bouche: Raw mullet in apple. Which is not what I’d pictured. 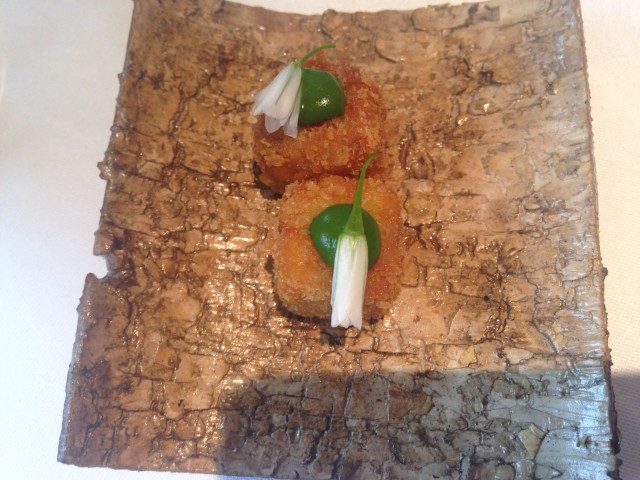 Amuse Bouches: Not entirely sure.

Canapé: some type of miniature Gruyère tart. I went through a miniature tart phase during the month I spent in Bangkok. Or was it a week?

First course: Ceviche of scallops. Not like any ceviche I’ve tasted, but very intriguing. 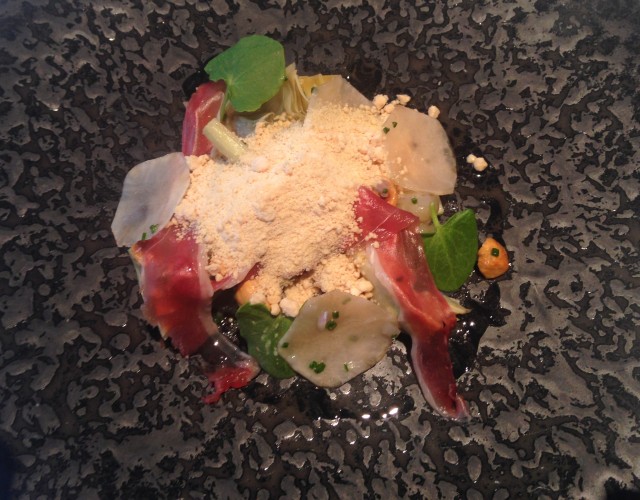 Second course: Morels in something truffly.

Second course: Langoustine, leek and something else. 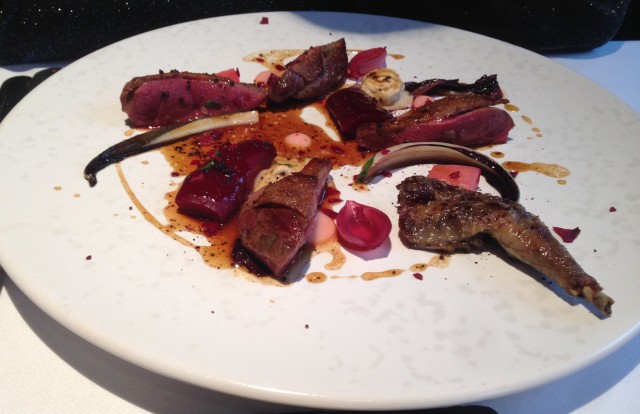 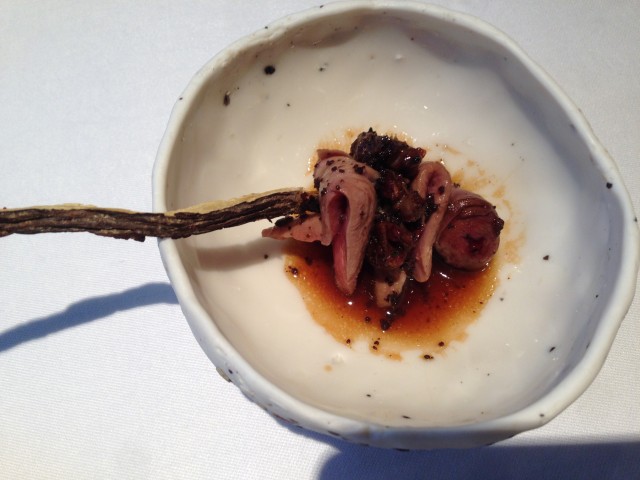 Third course: The Pigeon’s entrails: Heart, fillet and other stuff skewered on a twig. Fun fact: This is also how I dispatch my rivals.

Even the serving of butter looks swanky.

Dessert: Chocolate and banana pie. I detest banana so I could only interpret this as a declaration of open warfare by Mrs Del Monte. I’ll skewer her entrails good and proper!

Petit Fours: A biscuit, Clementine marmalade and chocolate with eucalyptus.

Don’t get your hopes up ladies, he’s spoken for. Fancy restaurant in the background I think you’ll agree.