This blog shall be quick and dirty. Like my 12th girlfriend! Zing! And my 16th, 20th, 23rd, 24th, and 27th. To be fair my first eleven girlfriends didn’t know they were my girlfriends. Nor 13th – 17th. The others were perfectly nice home counties girls of whom mummy very much approved, but who all learned to despise me. Only girlfriend 33 was qualified for promotion to wife and she’s now called Mrs Del Monte.

Trinidad Flavour is a basically a port-a-cabin next to Goldhawk Road tube station. Port-a-cabin, but a permanent fixture. They keep non-traditional hours, which is why I was pleasantly surprised to find it open on Saturday afternoon until I realised QPR were playing at home, hence it was open. It also serves as a shipping company and international money transfer outfit, so as I waited for my Curry Goat Roti to appear, I was entertained by a man’s increasingly frustrated attempts to convey a reference number to an unreceptive family member abroad. It would have been funny had I watched it on telly. His curry goat-smeared compadre was bragging on how he’d made six white boys soil themselves during a street-confrontation. And judging by the impact he was having on a solitary white boy during a perpendicular non-confrontation, I believed him.

I accepted the offer of pepper and hauled the dense package back to Charlie Towers. It was huge. Trinidads and Toboggans must only eat once a month, like pythons or runway models. With an extra helping of salt, the roti was delicious, spicy and there was no holding back on the goat itself, accompanied by melty potatoes and chickpeas, all ensconced within the moreish roti. £4.50 effectively for two as I was forced to share it with Mrs Del Monte. My lucky 33.

Look at that thing. Huge. You’d risk concussion if it fell on you. 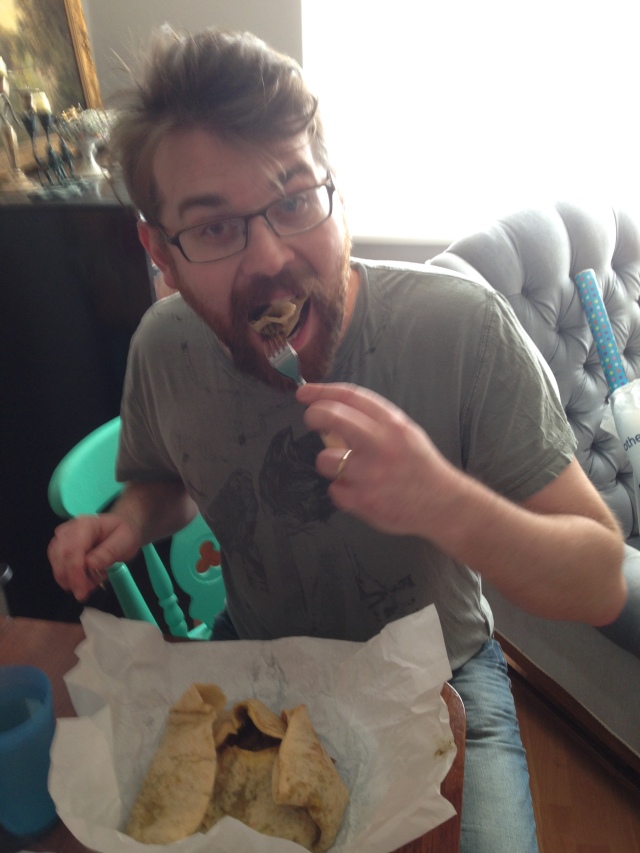 Charlie grew up on the mean streets of Ipswich. He’s no stranger to the pugilistic arts nor cockerney rhyming banter. But there’s simply no way that you can eat this roti from the bag without resulting in curry goat T-shirt. And it’s clear from the way he’s holding my knife and fork that he’s street.

Le menu in rather charming cursive. Note the soup is unpriced. Or rather, it costs you more than mere currency.

Presentation is everything! Though, in this case, it was nothing. The roti was everything. 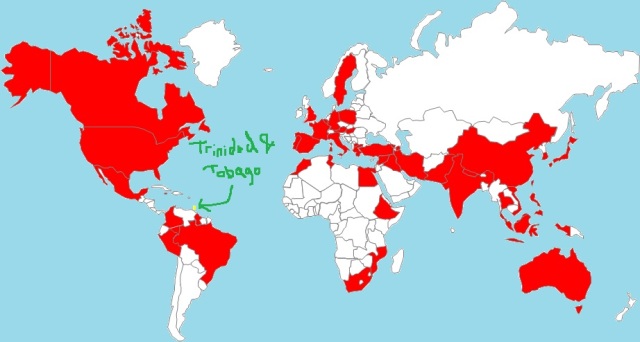