[For those of you having difficulty remembering whose blog this is, it’s mine. Charlie Del Monte’s. No one else’s. You may be forgiven for confusing this with Knocker’s blog (google it), but not by me. Not now, not never. I will end you. But as it happens, Knockers has been a little more prolific than me recently. But don’t read anything into it. I’m still the daddy.]

I can’t wait for the day that DH* and I eventually buy our forever-home. We’ll take staycations there, and while DH is off man-scaping in his man-cave consuming beer/chocolate/pies for men only, I’ll get my manny to arrange play-dates so I’m free to host girlie nights.

During said nights, two white friends and one black friend and I will don our favourite pastel, empire line shirts and gather round in my all-white kitchen (or possibly all-white sitting room) where we’ll have exasperated but good-humoured discussions about how inept the men in our lives are at meeting our most frivolous demands. We may even discuss how hot that guy off that scripted reality show is. Or how her off that other thing is really owning her curves in that gossip magazine.

My friends will marvel at how delicious the processed foods that I have arranged on a platter are, and be utterly flabbergasted when I tell them that what they are eating is, in fact, wait for it….low-calorie. I know, right? Granted, like Cool Whip, these foods may technically be one chemical away from pantyhose, but they mean we can all have a lovely time without the burden of impending weight-gain doom. It’ll be amazeballs. I’ll do hilarious accents and joke about, I dunno, the colour beige or something, and my friends will LOL and LOL without a care in the world, thanks to their drive-weave top sheets.

Until such time, we have to content ourselves with restaurants where we eat food out of the ground instead of packets, such is the bane of our hair-tonged existence. Which is how we came to find ourselves at the Andover Arms (http://www.theandoverarms.com) in the Brackenbury Village in the Ravenscourt Park end of Hammersmith. When I suggested the venue, Boogalee said, ‘Isn’t that an old man’s pub?’ and indeed she would have been right a few months ago. Recently, however, a band of gastrobandits swooped in and somehow managed to transform the joint without a single battered leather sofa. The result is a pub that still looks like a pub, where aforementioned old men (who, lets be honest, are often preferable to young men) can still read the Racing Post in peace without techno music causing their ears to bleed.

It is hard to say whether the food or the staff are the real stars here. However, after much deliberation I’m giving it to the food because the waiters don’t have six-packs that my friends can giggle over once we’ve cunningly tricked them out of their clothes. The menu is seasonal, varied and what people who deserve a slap would call ‘honest’. There’s lots of choice and because I’m a bleeding-heart liberal who always thinks of minorities before myself, I was pleased to see that vegetarians are catered for in more creative ways than your standard veg lasagne.

Boogalee and Dr Quim, Medical Woman shared a selection of starters, including scallops and squid with pea puree, chicken liver pâté with scrumdiddlyumptious chutney and coconut crusted prawns, no less. There was lots of mmmmmm-ing. I followed the advice of the jolly helpful and jolly jolly person that served us and went for a hunk o’ meat in the form of half a shoulder of lamb. I suspect it may actually have been half an actual lamb as not even I, who can down an entire tray of roast potatoes without so much as a belch, couldn’t finish it. What I did manage to consume, however, was fall-off-the-bone perfection, made even more perfect by the additional bigger-than-a-tiny-cream-jug of gravy that I was given without the merest whiff of begrudery. Unheard of.

There are what my dad would call ‘proper beers’ on tap and we might have sampled one of the good-looking wines had Dr. Quim not been scheduled to perform a lobotomy that afternoon. Instead, it was all washed down with tall, cool Diet Cokes. Next time, we’ll go for dinner and try some of the cracking puds on the menu, worthy of a full day’s fasting. Lemon and ginger crumb tart with basil and lemon cream anyone? OK, so they don’t have thick, creamy yoghurts that you’d never, ever guess were low fat, but what’s the point of eating those if there’s no armchair to curl up in and you’ve forgotten to wear your cashmere polo-neck?

Coconut prawns and chicken liver pâté.
(They spotted that the starters were being shared and spontaneously brought extra toast, without charging for it. Brilliant.)

A walloping dollop of scallops (and squid).

Menu (Not even Del Monte would’ve begrudged the service charge). 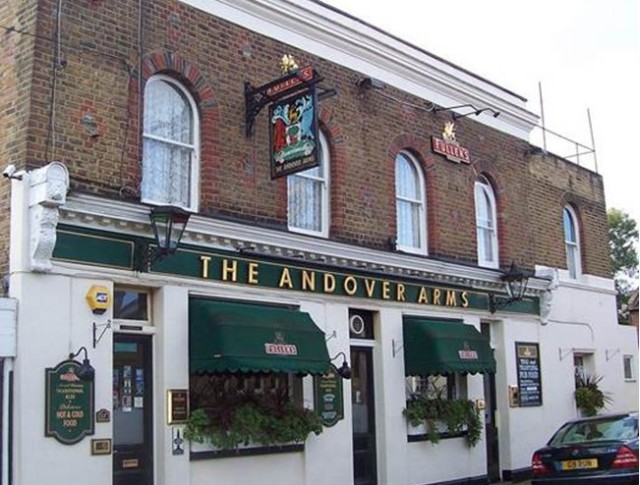 ← Gaudeloupy
The Madrid of King Del Monte. Wow. That was crowbarred. →