What a lot of big time bloggers do this time of year is list their lowlights and highlights for the preceding 12 months. It’s as meaningless an activity as the Oscars or talking about your feelings. But for some reason the punters lap this stuff up so I’m going to jump on this gravy train and generate some content that you will read and that somehow validates the entire exercise. Big whoop.

What makes this 2013 review different from all the rest is that I actually had a momentous year. I went to Colombia, I ate a guinea pig, I found my pen and I got hitched. I know ladies, I don’t like to rub the fact that I’m off the market in your faces either. But to be fair, as a collective you’ve never liked me rubbing anything in your faces so no harm no foul. And Kate and Wills. Also politics. 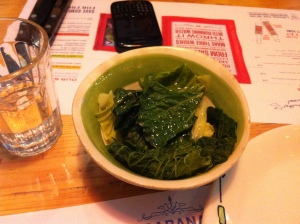 Not a lot of greens

Having been to Viva Brasil in Cardiff and El Rodizo in Madrid this year, Cabana failed to meet the standard to which I have become accustomed. To be fair, I wasn’t there to feast, but it just felt very silly seeing the servers wander around with ginormous skewers with one bit of meat on them. I did like the Cassava Chips.

Carbonnade – the gravy is getting a skin on it like school custard. They’ve over-complicated it with prunes and apricots, but I was OK. Mummy says I’m jolly brave.

Belgium can be a rather charmless place to the uninitiated, but it has a lot to offer and excellent nosh is one of those things. Belgo is rubbish. Like your mum’s flapjacks. 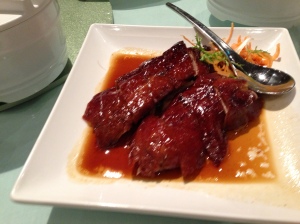 I quote: “Duck Cantonese style. The skin was supposed to be crispy – instead it was squishy and fatty. The (cold) duck itself had no flavour. The sauce was syrupy but again had no flavour.”

Leaving the last two in the dust, Royal China had everything: abominable service, high prices and mediocre tepid swill for food. I assume it’s run by magicians who also get away with tax evasion and bigamy.

#7 Have I got to do 10 of these? Screw that. Three will do. That was the least good three for 2013. Charlie speak English good. Dishonourable mention to the Maple Leaf who wasn’t really trying but isn’t really a restaurant either so whevs.

The Best Around! Nothing’s gonna ever keep you down!

Leaving out The La Caprice, River Café and Pétrus which I guess must be Michelin starred (Research!) my favourite restaurants for 2013 were:

Kofte Etruskana. Don’t judge it by my inept photography – this was a delicious dish.

A Turkish restaurant in Victoria which delivered and for not too much of a pretty penny. Last time I looked they’d yet to start serving Turkey Turkey and for that they miss out on the top spot.

Plan view of a soufflé I think. My photography is getting worse somehow.

The only thing wrong with this place is that it should be called DehAsa and not DehEsa which I always get wrong. The food was exquisite but the service was remarkable. And by remarkable I mean they didn’t throw us out.

Grilled, boneless baby chicken. Did all that happen before they killed it?

Syrian food served with the efficiency of contract killers. Meat cooked to perfection and the revelatory mint and lemon juice means I shall be going back to this place a lot.

Best trips abroad. For food that is. I mean my honeymoon was pretty amazing but the food was only OK.

A starter of ham. For sharing apparently. Not on my watch.

I’ll be going back to Lisbon specifically to eat because I feel like I only scratched the surface. Grilling meat is apparently a gift these people have in buckets. I keep very different things in my buckets. 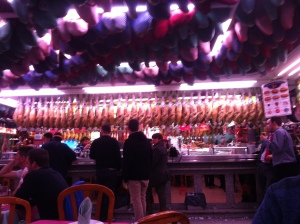 It’s like that scene in Aliens when the aliens are in the room on the ceiling except instead of aliens it’s hams and I couldn’t be happier to see them!

One word: Ham Museum. And the Gozeiko Kabi restaurant deserves a special mention.

If you’ve never seen a pre-coital bearded man before then this might be educational. The horse is only minutes away.

It was only ever going to be Brussels. They serve horse. Rare. They could punch me in the tooth whilst they’re doing it and I wouldn’t mind. As long as they don’t molest the horse (that has been killed, butchered and seared for my gastric pleasure).

I know you all think I have an amazing palette. Apparently that’s palate. What the Hell? Anyway, I do, but I also lived in Scotland for 4 years which put my foodal development back 20 years. Those poor haggis-chomping wretches. So the following list may come as much as a surprise to you as it did to me. But for different reasons. I feel like I’m not getting my point across. But I’m doing all the typing so it’s probably your fault.

Momo – East meets a little further East. Depending on where you are now.

Saganaki – for those of you who view garlic bread as a health food.

Leek on Pizza – this will be old hat, like sun dried tomatoes, by this time next year.

Lemon and mint juice – doesn’t make up for the lack of booze but then what could? Low cut tops is the answer.

Pork that tastes like beef – As if the magical pig wasn’t giving us enough already!

The restaurant industry can be a cruel mistress, like the sea. Or your tape measure. Vardar I couldn’t speak for; Walkabout was probably a death-trap on multiple levels; but Malina? That place was ace.

And what about me? What about Charlie Del Monte? What new wisdom have I acquired over the last 12 months? What new insight do I have about the world and restaurants? Nothing new. I’m still 100% amazing same as I was last year. Fact.

RESTAURANTS OF THE WORLD UNITE!