People know me as an avid follower of developing trends in the world of popular ‘pop’ music and so it should come as no surprise that I made my way straight to the open air sweat lodge that is Lovebox (http://mamacolive.com/lovebox/). The bears were out in force and so finally I had some worthy company for the Del Monte beard. There was a huge amount of drug taking on display. I think that prohibition is ridiculous but the law is the law, so I hurried to inform an attending officer of what I had witnessed and he told me to “move on Serpico.” Whilst I didn’t get the reference, I got the distinct impression that he was being neglectful of his duties and labeling me with the narc slur. There’s nothing wrong with being a narc, they perform an important social function. Even at school I got quite the reputation for a being a narc; Mrs Braithwaite the drop-dead gorgeous Biology teacher threatened class detention unless the person responsible for sending 46 lovingly rendered etchings of her was identified. I was honour-bound to reveal the identity of the perpetrator. Me.

Mrs Braithwaite. Still got it.

Lovebox had a bunch of food vendors around with some quite exotic-looking food on offer. Who doesn’t want to enjoy a spicy curry whilst sitting on the dusty ground next to a port-a-loo, in direct sunlight and 29°C heat? My darling little beard and I were quite hungry however between Lianne La Havas and Kelis and we happened across the Karantania Deli (http://karantaniadeli.co.uk/). We tucked into some savoury spinach and feta strudel and a ćevapčići‎, a sandwich made up of nuggets of minced meat served over tomato and some sauce. Well worth a munch. Karantania is a balkan deli, originated by a guy from Slovenia; Karantania used to be a bit of Austria and Slovenia so it won’t count for the quest, but it does count as delicious. 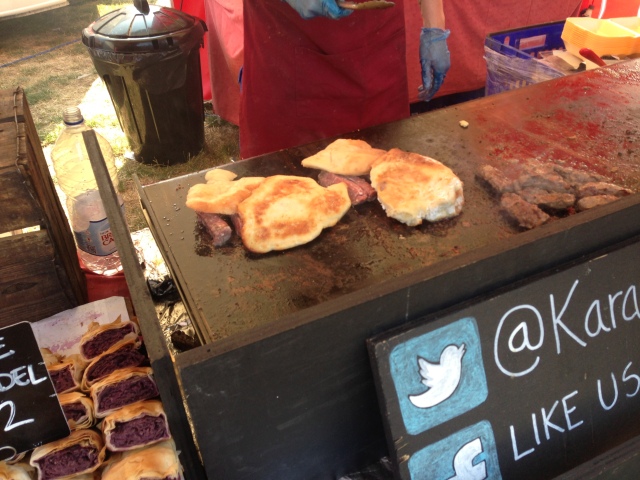 The bread is warmed over the cooking meat – inspired!