Another huge land mass with a 1bn+ population effortlessly ticked off my list. We are mere days away from me making Fiancée Knowles the happiest bird in in Christendom. So like Jewish people at Christmas, we celebrated with some Chinese food, with a Best man and his doctor friend. I prefer dining with a medical professional – who knows what sort of bone I’m next going to get stuck sideways in my gullet?

I want my favourite WWF wrestler Chyna to open up her own Chinese restaurant and call it Chynese Wispas. Maybe they could give out mini Wispas instead of mints. I haven’t thought it through.

I’m as big a fan of noodles and crispy Peking duck as the next non-Chinese person. Pearl Liang (http://www.pearlliang.co.uk/) has all of that and much, much more. It has one of those baffling, multi-page menus which requires a prolonged period of study, so it’s handy if you’re with some one who’s decisive. We kicked off with the hors d’œuvre (exotic language isn’t it?) platter which kicked ass. I think next time I go, I’ll just get that for myself. We followed up with a free-for-all of barbecue pork, cripsy roast pork belly (my personal favourite), sweet ‘n’ sour prawns and Szechuan prawns. It’s all scrumptious (no cribbing Egon Ronay or another food critic). All washed down with a tall, cool Tsing Tao. It all comes out very quickly indeed but there’s no sense of being hurried.

It’s a lovely setting and there are some private dining areas which would be good for a works do, and a few nooks where you can drunkenly corner Nancy from Accounts to tell her that you’ve secretly had a crush on her since she wore that sheer blouse and you don’t care about that lumpy mole on her face unlike Martin or Neil from Marketing.

The charming exterior of Pearl … what the Hell is going on? What’s that nozzle doing with my bird? 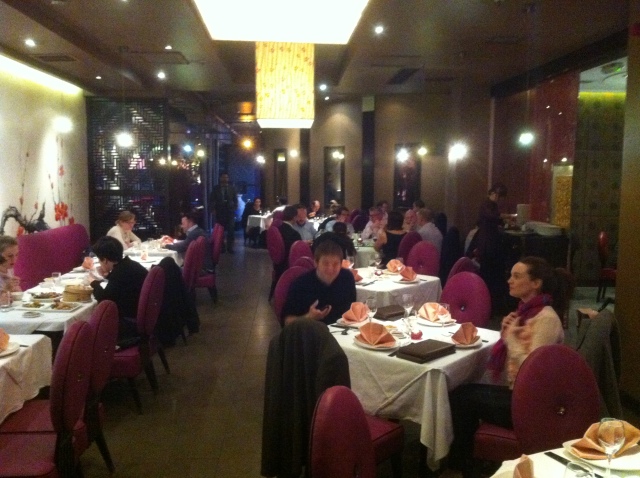 The beautifully appointed interio … there they are again! What in Hades is going on?

A near perfect square of cripsy pork. 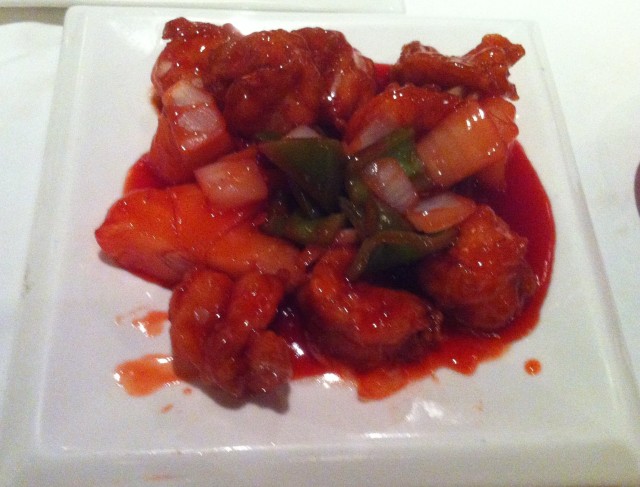 Sweet n Sour Prawns. Or: Where did I put the contents of that cadaver’s stomach?