April 1, 2013 · by charliedelmonte · in London, Philippines · Leave a comment

Here’s what I know about the Philippines:

Still, I’ve yet to allow my brand of jingoistic ignorance and general small-mindedness prevent me trying new foods for the sake of this blog. By which I mean the sake of you. You my loyal, dazzled readers. So in many ways you owe me. Though I shan’t be eating testicles. You and me don’t have that kind of relationship. Yet.

Port of Manila (http://www.portofmanila.co.uk/) is concealed in Brackenbury village which makes me think that it’s some sort of tax write-off for a Philippino gazillionaire. Not that I’m complaining.

According to the website Port of Manila draws Filipino stars on their visits to London and it’s cool to think that international stars can come to London to lay low. I presume Nicholas Lyndhurst is kicking his heels in Manila. And they can enjoy the taste of home whilst here. Charlesetta and I shared some shrimp Okoy, which were okay. This was followed up Bistek Tagalog for her and Lechon Kawali for Charlie. We both wolfed it down. The Lechon was scrumptious, basically very well-cooked pork belly with crackling, but needed more moisture. All this washed down with a tall, cool (Filipino) San Miguel. They also had a good wine menu offering both white and red. The place was nicely decked out, but could have benefited from a decent sound system and some traditional music.

Are there other Filipino restaurants in London?

I asked all the other diners to stand to one side so I could get a good view of the place. They immediately complied. 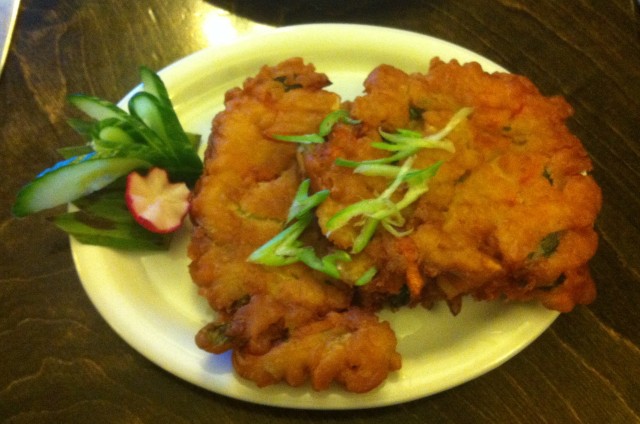 The Scotsman in you is thinking “I know it’s deep-fried, but what’s wi all the veggies pal?”

Lechon Kawali. He did so much to help the Kawalese.

Under all that onion is a lot of beef.

Potatoes. The Irishman in you is thinking “I’m kind o’homesick”

Port of Manila – making 0.4% of Brackenbury Village look exotic since 2009. 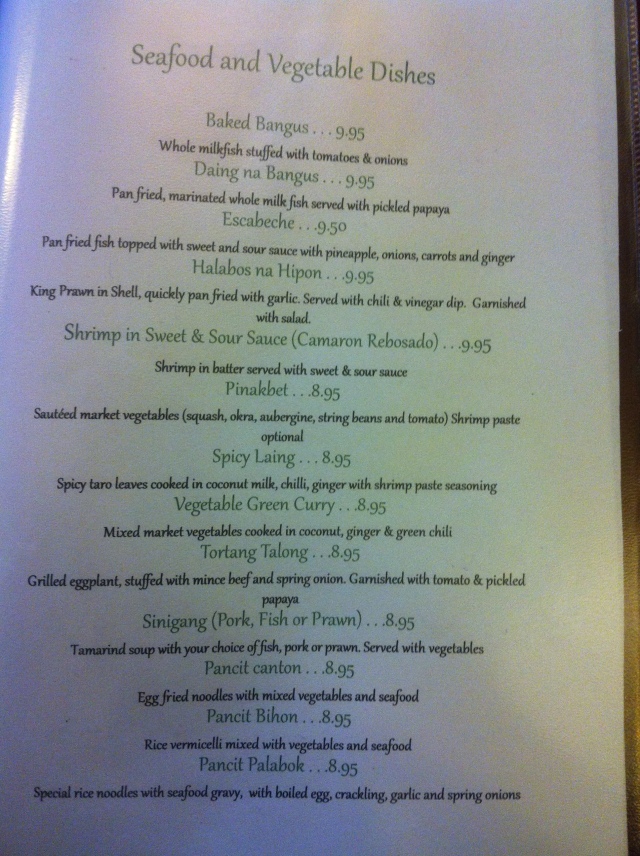 Vegetarian? Tortant Talong not so much.